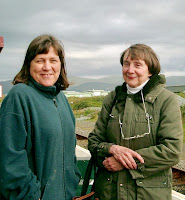 I learned today of the death of Anne Stevenson, 1933-2020, poet extraordinaire, my dear friend and collaborator for so many years. I found her poetry long ago, in an OUP anthology of English poetry: the poem, 'Path', which I set for countertenor and strings (for David James, Sinfonia 21 and Martyn Brabbins) back in 1995. We met, and I discovered that she and her husband Peter Lucas had a cottage in Snowdonia, not very far from our own home in Aberdyfi.  Thereafter we had many meetings in North Wales. At this first meeting, in a London pub, I heard her give a poetry reading which included two poems from Correspondences. She presented these poems vividly, with a sparkle in her eye, and thus my Daughters' Letters was born. Anne heard this piece while on its Contemporary Music Network tour of the UK and announced there and then, 'We must write an opera!'  Well, we did: Medea. It was finished after a very long gestation earlier this year! After Daughters' Letters, I set many poems by Anne, all, I'm so pleased to say, with her enthusiastic approval. These included, for solo voice, the five of Spring Diary, the three of Trinity LISTEN, the three of Wildflower Songbook, the two of Colours, the two Nantcol Songs LISTEN, three of the four in Moon and Birds LISTEN, that of A River, and 'Moonrise' in the Moon and I. This last is yet to be performed: it will be premiered at the English Song Weekend in Ludlow in October 2021. Sadly, it was postponed from 2020, when Anne had hoped to attend the concert. I set also The Shape of Trees LISTEN, and the three poems of The Listening Eye for SATB choir.  For her 70th birthday, I gave Anne A Garland for Anne, five piano pieces to which, she told me, she gave pride of place on her Durham piano. (The first of these pieces, 'The Therapy of Moonlight' LISTEN, taking its title from the last line of the poem, 'The Wind, the Sun and the Moon', is now on the ABRSM Grade 7 syllabus, and has been accessed on the internet many thousands of times.  I hope its young players have been intrigued enough to look up the poetry that inspired it.)

Anne always talked of the musical basis for her poetry. I took this as a given; it was/is my language.  So often after poring over anthologies and collections of poetry I returned to Anne's works as if coming home: it was where I was, and still am, most comfortable.  Her poetry is clear, concise and always has a reason for being; it is also full of energy, visually stimulating, often surprising and . . . well, musical!   While I must say goodbye to my dear friend in her earthly form, I remain attached to her through her wonderful poetic legacy, much of which she so generously gifted to me.