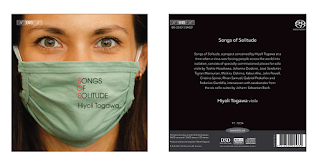 'Salve Nos' for solo viola, on Hiyoli Togawa's CD, Songs of Solitude (BIS). The score is published by Tŷ Cerdd. LISTEN
Now that lockdown is being relaxed, international performances of Rhian's works are underway again: Sophia Tegart at Washington State Univ, Pullman, WA, is preparing 'Wherever I go' for solo flute for a webcast; Alejandra Medina at UNAM in Mexico City is soon to be playing 'Blythswood'; Deanne Ekstrand at Univ. of South Dakota, Vermillion, SD, will be playing movements from Isolation Suite.  In the UK,  Moon over Maenefa, commissioned by the Royal Academy of Music for its 200th anniversary,was premiered by Marcu Dawson on 31 March, 2021 at the Angela Burgess Concert Hall at the RAM and is now online. LISTEN Also, the Tailleferre Ensemble have placed the trio, Redlands Suite online, LISTEN while the oboist in the ensemble, Nicola Hands, has included Rhian's transcription of Salve Nos for oboe d'amore in her recent online recital. LISTEN
Another airing for 'Clytemnestra' (from the BIS CD -- see below) occurred on BBC Radio 3 on the Lunchtime Concert on Wednesday, 20 January, 2021 -- the day of momentous events in the USA.  Very à propos!
'The Therapy of Moonlight', no.1 of the piano suite, A Garland for Anne (2002), is now on the ABRSM Grade 7 syllabus; as well as the ABRSM's published recording and that of Chenyin Li, who recorded the suite for the CD Light and Water in Rhian's presence LISTEN there are now at least 13 performances of the piece on YouTube (with over 20K hits).  In late January 2021, Rhian gave an on-line presentation of the piece to performers and teachers in Australia and China.
Recent Publications
Five recently issued: 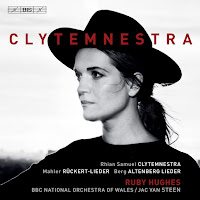 The CD, Clytemnestra (BIS/Naxos) which includes the voice & orchestra cycle, Clytemnestra, has had a wonderful reception: it was short-listed for a Gramophone Award, 2020, and received  fabulous reviews with *five stars* in The Times and BBC Music Magazine, great write-ups in The Gramophone, Guardian/Observer, Telegraph, BBC Radio 3's In Tune and Record Review (on two programmes, with Gillian Moore and Sara Mohr-Pietsch, respectively), on Discotable (Netherlands Radio 4), Hong Kong's Radio 4, and online journals such as The Arts Fuse (Boston, USA) and Music Web International, and a Gramophone podcast by James Jolly.  Rhian talks about Clytemnestra in a video published by BIS.  The CD was issued on 4 January, 2020. Rhian's work, performed by Ruby Hughes, soprano, with BBC NOW conducted by Jac van Steen, was broadcast again on BBC Radio 3 on Thursday 15 October, 2020 and again on 20 January, 2021. 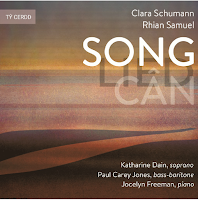 The Guardian/Observer included a complimentary review of the CD, Song-Lied-Cân (Tŷ Cerdd Records): issued on 6 December 2019, it contains the three songs of The White Amaryllis (May Sarton), the 5 songs of The Flowing Sand (Samuel Beckett) and 'Yr Alarch / The Swan' (anon) as well as some beautiful lieder by Clara Schumann. The singers are Katharine Dain and Paul Carey Jones, the pianist, Jocelyn Freeman. All wonderful performances. Available on Spotify.   Four other CDs are in the works!